Ready for One Ocean Expedition

On Saturday 29 October, Kamilla Hope Kleppenes and Ingrid Weltzien set sail towards Singapore, where they'll embark on Statsraad Lehmkuhl and learn more about the ocean's important role for a sustainable future.

Earlier this year, we organized an internal competition in which two lucky winners would join One Ocean Expedition on an unforgettable adventure. Everyone who participated had to submit an application letter and the winner was selected by COO Heidi Skuterud and Managing Partner Finn Bjørnstad.

The lucky winners were Kamilla Hope Kleppenes from the dispute team in Bergen and Ingrid Weltzien from the labour law team in Oslo.

"I'm very excited about the trip and I'm sure it will be an experience of a life time." I have never actually sailed before, so it will be educational to see how this actually works. In addition, I'm looking forward to experiencing life on board the ship, and getting involved in the research related to the expedition", says Kamilla.

Statsraad Lehmkuhl and the One Ocean Expedition project has been on a circumnavigation since August 2021 and has now visited 31 ports. When the ship arrives in Bergen in April 2023, it has travelled 55,000 nautical miles in 19 months.

Colleague Ingrid is also looking forward to the adventure at sea.

"I think this will be a great experience, and I especially look forward to learning how the operation of such a large ship works," says Ingrid.

From a fisherman's family

Ingrid is looking forward to getting to know the others on the ship, and hopes for wonderful nature experiences with beautiful sunrises and sunsets on the open sea.

- Maybe we'll be lucky enough to see dolphins or whales along the way!

They are both incredibly excited about what lies ahead.

"I'm from a fisherman's family, so I can at least boast of having learnt the difference between port and starboard. But apart from fishing trips in a wooden boat as a child, my boat experience is limited to shorter sightseeing trips on a sailboat on holiday," says Ingrid.

"As I have no particular boating experience, I am a little worried about getting sea sick", admits Kamilla. 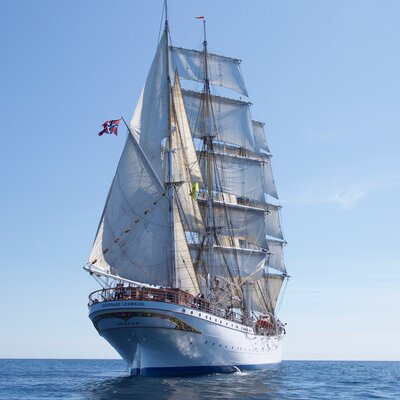 On the lookout for pirates

In just a few days, Kamilla and Ingrid set their course towards Singapore, where they'll join the expedition for a full six days – all the way to Jakarta in Indonesia.

They have both received several information letters from the ship, being able to prepare for what is to be expected.

"Everyone on board will take an active part in the daily operations and sailing, so we will have a basic introduction to sailing and seamanship. Furthermore, all the fellow sailors are divided into duty teams, with four hour's shift twice a day. We get various tasks at these shifts, says Kamilla.

"My heart rate rose slightly as we were informed that departure from Singapore had to be accelerated in order to reduce the likelihood of running into pirates in the most vulnerable areas along the sailing route.

We look forward to following Kamilla and Ingrid's journey with One Ocean Expedition!